Posted on January 29, 2012 by findingfoodfluently

As soon as the tour group exited the airport, we were introduced to the two DPRK minders who would be with us for the duration of our journey.  The woman had more of a stiff upper lip, while the man repeatedly chided my non-tucked in shirt, rightfully so, particularly anywhere we went that involved a Kim.  Beyond my own shortcoming, and as one who enjoys the independence traveling can provide, they were fine.  Sometimes they would say we can’t take a photo from the bus, usually of farmland or run-down buildings,  so as to not capture the miasma that defines much of the country, let alone a wintry version. One other note of interest, they each had a Kim Il Sung lapel pin hanging by their hearts (photo courtesy of the Korean Friendship Association).  I first saw these at a DPRK restaurant in Dhaka, whose waitresses frowned and scurried away when I told them I was from 미국 (USA).

By the by, the order in which I present the photos does not at all follow the itinerary. 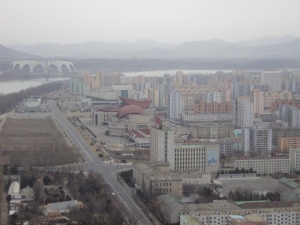 A better choice for Blade Runner?

Courtesy of a lack of private ownership, the wide streets (for processions?  war?) are quite lacking in meaning in the capital.  There are packed trams and buses for the locals, as well as murals dotting the cityscape, but other than that, no traffic lights and  barely any pedestrians.  But, about the lack of semaphores…in their place were sights for sore eyes in a city of eyesores (which I rather like anyway): traffic women.  I could never get a good picture of them, but they had robotic gestures,  as if they meant anything, for guiding cars, and moved so swiftly and effortlessly in their attractive uniforms…I wish there was a raffle or charity auction to go on a date with them.  We’d reminiscence about the good ol’ days when US imperialists (tourists) weren’t allowed in, when mayonnAsia didn’t exist, when Koreans had just two last names instead of three… (for a bit of slightly related randomness, try out this online diversion: http://www.koryogroup.com/Pyongyang_racer/racer.html ; why the need for a horn is beyond me) 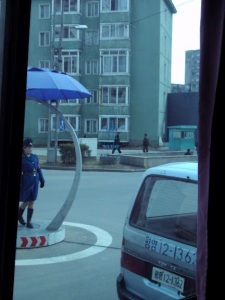 We visited the Arch of Triumph, commemorating Korean resistance to Japanese occupiers from the 1920s to the 1940s, and inaugurated on Kim Il Sung’s 70th birthday.  If you’re into arches, then it’s well, it’s got a good stature, a nice granite-touch and has a more commanding, if less St. Louisian presence than its un-built cousin over in Bahrain (link courtesy of Gagandeep Sharma).  Nearby, a mural of Kim Il Sung giving a speech to a crowd of black-haired, Korean-looking folk hums. 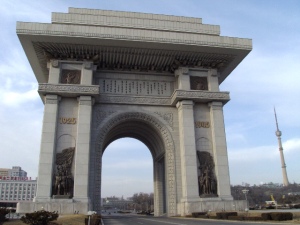 How about the one on the right? 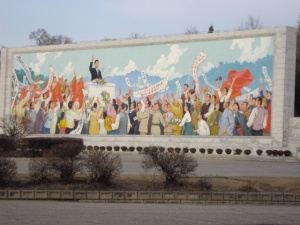 Juche (주체) is the ideological brainchild of Kim Il Sung that focuses on the notion of self-reliance.  Three primary attributes of juche concern dependence on DPRK natural resources, freedom from the reins of any global hegemony and an emphasis on military strength.  The state-calendar is ascribed to Kim Il Sung, in particular his 15 April, 1912 birthday, and if you’d like to elicit a groan from one of your poly-sci teachers, try adding the date Juche 101 (2012) to the top of an essay.  Oh, and there’s an observation tower along the Taedong River, called Tower of the Juche Idea, which had stunning views of an empty plaza below(link photo courtesy of Charles K. Armstong): 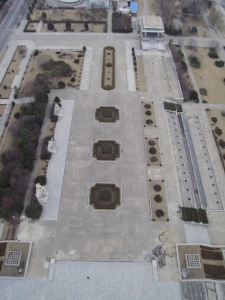 Directly across the river from there, you can clearly see the Grand People’s Study House, a huge library with both computers AND people, as well as Kim Il Sung Square, home to many a video of the Kim regime overlooking Pyongyang citizens.  Although we couldn’t interact with Koreans in the library, we noticed that some were students attending English courses, and many others were simply reading or studying. 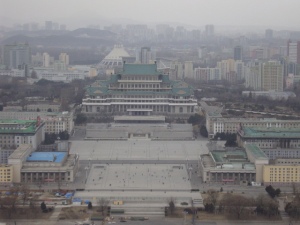 This would be a blue sky in Beijing

I’ll be back soon with more photos from around Pyongyang, and soon after, a bus ride to the border with the ROK.