Posted on February 14, 2012 by NoWorkAndAllTravel

I’ve been interested in mass transit systems, say subways (metros) and monorails,  for quite a long time; I remember being impressed by the people mover at Disney Weld in Florida in the early 90s,  more so than by any of its non-Epcot attractions.  I grew up with the less encouraging but anytime useful New York City subway and the oft-delayed, freakishly long escalators  of DC.  Octopus (Hong Kong) and Shenzhen Tong cards are post-university mainstays, but the real doozy to me has always been Tokyo’s white glove service.  Though, one of the jewels of a metro system fanatic’s crown is the Pyongyang Metro. 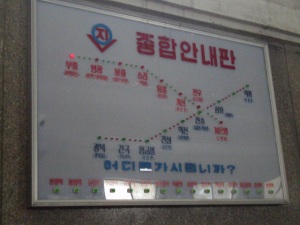 Just about as good as Baltimore's

Even if you’re not specifically curious about how commuters commute, www.urbanrail.net is a quality site that introduced me to the attractive station murals of the DPRK capital’s lines, as well as to other urban areas rail systems’.
Who knew that Newark, NJ has one of the oldest subway systems in the US?  Sadly, I did. Take heed, this may arise as a poll question soon… 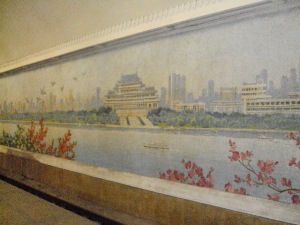 We give to you, our cousins

The subway was quite crowded, and we must have been there on an auspicious day because we were able to see more than two stations.  One rumor was that there were crowds purely for the tourists, as if to say, why else would anyone take a subway?  The buses and trams on the street were also jam-packed each time I noticed them, so why single out the metro?  Eh, It wasn’t a given that the group was allowed in to the underground anyway, though it makes you wonder, who is harder to round-up in the DPRK, a flock of outsiders or a gaggle of locals?  The carriages of the trains were immaculate, as were the stations, and we pleasantly weren’t segregated from citizens either.  It’s not as if I could say more than glutinous rice cake (떡) or Where’s the WC anyway, but at least I got to speak some Chinese with the Sosan Hotel front desk chief.

We visited a school as well, which at least had a football pitch, and its students weren’t smoking and break-dancing in class, which is a step up from my tenure in Shenzhen.  One bizarre room was a taxidermist’s dream, and although we didn’t have much interaction with the pupils, Kim Il Sung and his progeny certainly do:

A visit to the DPRK was incomplete without a shimmy to glare at the southern yokels, and naturally, the point of interest was Panmunjom.  By the border was installed one of the tallest flagpoles in the world, proudly flying the DPRK threads.  After visiting the building that housed the signing of the 1953 armistice, we reached Panmungak, the closest edifice to the Joint Security Area, on the border.  First thing I noticed when looking to ROK’s Panmungak-equivalent?  A Family Mart convenience store:

Generous discount to those who defect

Here's looking at you, infidel

You are allowed to walk into the blue buildings shown above, and effectively cross over to the ROK, but why not harness your inner stoicism and plop yourself into a photo with a DPRK soldier instead?  But wait, where are the traffic women?  Bring ’em on.  Would there be a sudden necessity for traffic lights here anyway?

Other attractions we visited in the DPRK included the Victorious Fatherland Liberation War Museum, a revolving restaurant and the USS Pueblo, where foreigners enjoyed poking fun at the ice cream maker aboard.  Unfortunately, my camera didn’t find these places too exciting, or I dropped it one too many times, so please enjoy the last two shots in the spirit of its better days:

It was a good run

I hope that you had a good taste of the DPRK, and that you won’t be seeing the same murals in a city near you.  Though, if you happen craving a taste of the land of the Morning Fresh, o not, check out the following poll:

Wordpressing about food and languages at FindingFoodFluency.com, and about travel news and attractions at NoWorkAndAllTravel.wordpress.com
View all posts by NoWorkAndAllTravel →
This entry was posted in Architecture, East & Southeast Asia, Non-Aviation Transit and tagged Asia, Communism, DPRK, North Korea, Pyongyang, skyline, Travelogue. Bookmark the permalink.