Posted on April 3, 2012 by findingfoodfluently

Strolling through Japanese cities is endlessly fascinating to me.  Dodging the centenarians while on my bike is a completely different story, but the bizarre and often anachronistic architectural neighbors that make up a city block, the local tofu and bento (and shrimp tempura on white bread) shops, the numerous octaves of IRRASHAIMASE (いらっしゃいませ-welcome), the heavy metal piped into the supermarkets of wealthy residential areas (the notion, not the music) – yep, I haven’t gotten bored of them yet, and don’t plan to be on subsequent voyages.

Although I’ve spent by far the most time in Tokyo, I did get to visit 大阪 (Ōsaka) on a few occasions.  I’m not here to debate the differences between the two behemoths; they are both a blast and merit a closer look by any urban enthusiast.  Rather, before flying to 大阪 in September 2010, I did a quick online search for “unusual” architecture.  The Gate Tower, or Beehive Building seemed to be a good one (good for the ten people annually who make a pilgrimage to see it).  (Map thanks to google maps) 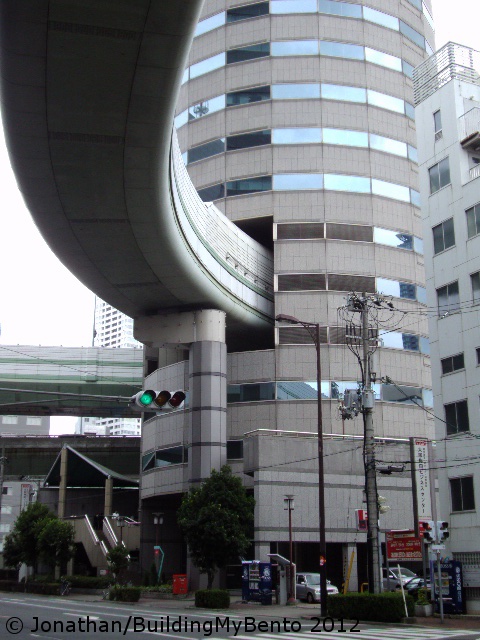 I’ve seen buildings constructed on top of motorways, but haven’t yet seen one where the road traversed the abdomen of the building.  From the looks of the construction company’s website, it was built in 1992, and I can’t extract much more from it since even with Japanese language pack installed, it’s just a bunch of wingding-wannabes.  (Link thanks to Sato Kogyo)  But let’s take a gander from within:

Taking an excursion to see anomalous architecture can be very rewarding, but it would be disappointing to just take a photo from the outside and scamper away.  The Beehive Building otherwise only has offices, so no one batted an eye at me for going upstairs; That I started drawing English lessons on the whiteboard in conference room 8C is irrelevant.  But if someone barked at me for zipping around the floors of the Genex Tower in Belgrade, I can’t blame ’em.  Well, even if I wasn’t searching for apartments, at least those have four walls.