Posted on May 17, 2012 by NoWorkAndAllTravel

There’s an irreverence so contagious among mainland China’s buildings that I’d be loathe not to add that I really enjoy scoping them out.  Considering the rapidly growing urban populations and seemingly endless number of smoke-addled cities  that house said residents, my task in finding such decrepit or bizarre structures most recently (December 2011) took me to Jiangsu province, more specifically a string of cities which are relatively close to and well-connected by high-speed rail to Shanghai.  (Map thanks to google maps)

In an earlier post, I mentioned that I visited Yangzhou to see the Grand Canal and try their eponymous fried rice.  Well, the Grand Canal was nice to see, but the fried rice left me yearning to rewind back to before it was ordered…at least there was other good street food on offer, and a couple of unusual buildings as well.

Originally, I included this in the Yangzhou post.  However, it gets along better with this group of photos.  The building was closed when I tried to visit, and by the looks of it the owners got conned out of a “stealth” roof.

According to Jiangsu.net, China Dinosaur Park (恐龙园 konglong yuan) is the largest of its kind in the country, and is located in Changzhou 常州.  This picture was  borne of purely dumb luck; I hopped on a bus near a Carrefour and this was the last stop.  The park was getting ready to close, but it was worth the haul for this digitally-noisy shot alone.

Oh look, another superlative for mainlanders to go crazy over.  Changzhou can claim Tianning Pagoda, completed in 2007, as the tallest in the world.  Dear readers, how does it feel to be older than SUBJECT MATTER?  Eat your anthropomorphic teenage heart out, largest, seated, bronze Buddha of Po Lin Monastery, Hong Kong!
-In other news, the Changzhou Grand Hotel is probably one of the better hotels I’ve stayed at in China, so if you’re in the area and have had a long day of marveling at the above distractions, stay a night. 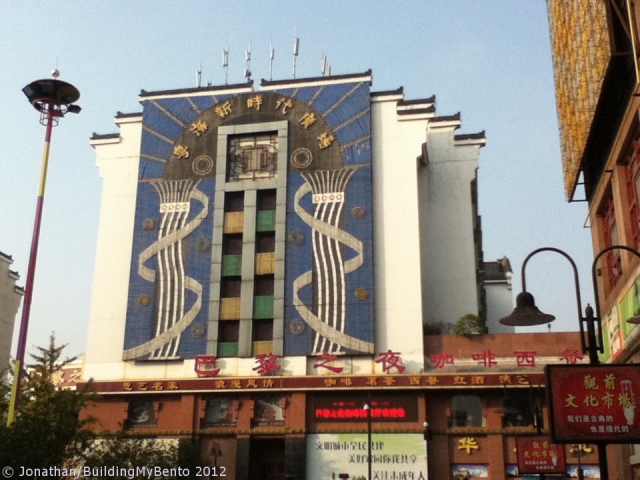 Suzhou 苏州 is a city renowned for its ancient gardens; how could you not be tempted names such as the “The Humble Administrator’s Garden” or “Master of Nets Garden?”  Well, a study abroad program took me to them years ago, also in the winter, so I figured it was time to see the grittier, newer side of the booming metropolis.  YueHai New Age Plaza didn’t really have it going on internally, but its exterior was worthy of being added to the list.  The red script below the overzealous columns reads “Parisian Night Cafe/Western Food.”

Another random bus ride took me to the Wuzhong section of Suzhou, and the above two photos, Dongwu Tower 东吴塔 (the third character also means pagoda, stupa or minaret.  Yes, let’s think of this building as a minaret)  It is a radio tower which had its entrance blocked off by a fence; a shame as it would’ve been a great view of nothing from the observation deck.  Actually, upon a review at google maps, I’ll give the view a bit more credit; the tower is due south of ancient Suzhou (where the gardens and its most famous canals are), the rectangular part on the map surrounded by a moat.  The tourist area is easy enough to get around by foot, and if you think you needed a reason to escape the well-traveled trail, look no further than the other Eiffel Tower of the East.

If you are interested in visiting the above edifices, although non-Chinese are more likely to set off in Shanghai, each city is quite accessible from Nanjing (where I haven’t been), Jiangsu’s capital, as well; its airport has buses to each of the above mentioned cities in addition to buses bound for Shanghai.

Wordpressing about food and languages at FindingFoodFluency.com, and about travel news and attractions at NoWorkAndAllTravel.wordpress.com
View all posts by NoWorkAndAllTravel →
This entry was posted in Architecture, China & Hong Kong and tagged Asia, buildings, China, jiangsu, structures, 江苏. Bookmark the permalink.