Posted on August 20, 2012 by NoWorkAndAllTravel

Do you collect world currency?  Are there any specific coins or bills that your collection is missing, and that ebay or taobao neglect to list?  As a child, a couple of visits to Thomas Cook currency exchange bureaus to snag some punt, schilling and drachma (you took the fun out of passport stamps too, Eurozone) made me interested in designs, widths (wow, that sounds dull) and denominations of various countries monies.  Before I wondered if that many zeros should exist (see below), I heard old yarns about citizens of Turkey becoming millionaires almost in an instant.  Pish-posh.  But oddly enough, my family planned a trip there, and the day we got to Istanbul, January 1, 2006, sole use of the new lira, the prosaic version with six digits removed (from 1 million to 1) was implemented.  Fortunately, a swift negotiation with a shop-keep at the Grand Bazaar left me with the above specimen, and the discovery of sour cherry (vişne) juice and more aptly Turkish cuisine more than made up for the potential “lofty” spending to be done. 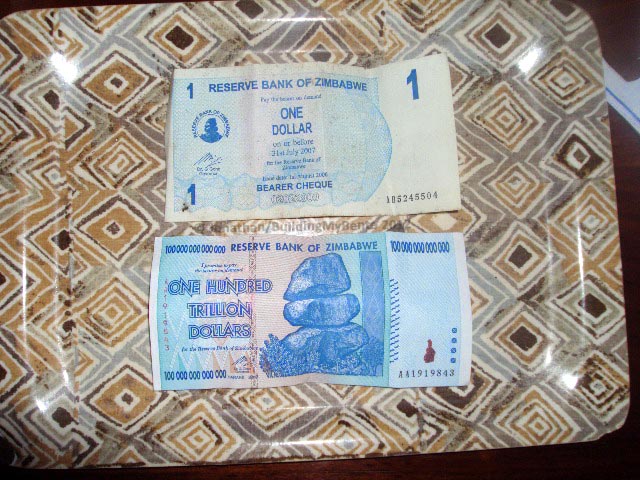 One digit to Fifteen digits

In the late 2000s, Robert Mugabe, President of Zimbabwe, not to be outdone in nationalistic numismatic nuances (oof) ordered the Reserve Bank of Zimbabwe to issue paper bills with denominations of up to one hundred trillion dollars, no doubt owing to the country’s staggeringly high inflation.  An unusual thought- how come countries don’t start with extremely low-valued fractions, make their way up to digestible fractions à la the Kuwait government and finally have a jolly-good show at ONE?…because not everyone is an accountant?  Don’t need more compelling rationale than that.  I was there in January 2011, and by the way, that One Hundred Trillion took me a good while to track down; I had to talk to a guy who said I walked too quickly, buy him a lunch of sadza (corn meal) and then “wait” a while.  (Link thanks to Chirundu.com)  Since it’s missing I’ll just have to go back and get another. 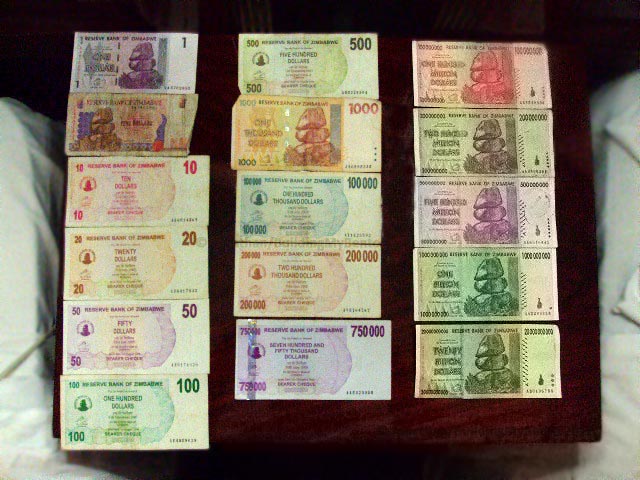 Zimbabwe was quite fun; the only downside is the lack of food options, but that’s another story.  Oh right, and relying on one of the handful of ATMs to dispense the cornucopia of colors you see above.  How much is the coleslaw again?  Nah, they quit using the ridiculously undervalued currency in April 2009, but I still wanted to get a bunch as souvenirs.  I’m just as interested in pursuing stamps as old bills, thus I went to a post office in Harare to view the loot.  Then I queried the postal worker about their storied billions and trillions, and she casually dumped a giant satchel of them onto a backroom table.  Sounds like I’m involved in more than just a hobby, eh?  Well, if only I knew…
———-

As I said, Zimbabwe adopted foreign currency as legal tender in 2009, and included among the accepted bills are ol’ greenbacks (US$).  Doesn’t it just pump you up when some countries demands that you give them crisp, clean, unmarked notes in exchange for a visa or something “official,” and the change you get looks like it has been lying under the sun for decades?  Buying food from a store in Zimbab took it a step further, and threw in a stick of gum (handwritten wrapper?; Big League Chew is a US brand of chewing gum) that tasted like a rose and a lump of coal had offspring AND South African rand (the coin), in addition to a US dollar. 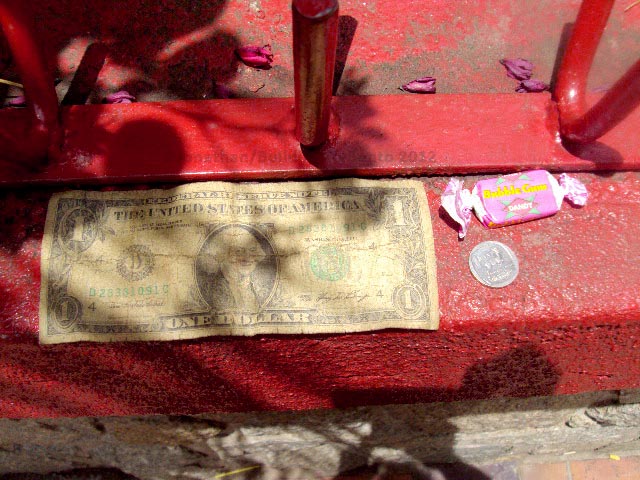 The change, after buying a carton of (imported) chocolate milk

Planning a trip to the former Rhodesia?   Then don’t forget to wash your Washingtons a few times beforehand.