Posted on February 14, 2014 by LearningFeelsGood

I can check “had a gun pointed at me” off the nonexistent list.

Should I have known better?  A camouflage (clearly not enough) backpack, sunglasses, a beard – not one of the trendy ones – I never experienced previous issues with that get-up.  Besides, I usually stayed in the Arab part of Bangkok, Thailand, so how exactly did I stand out?

Word on the street in the middle of 2012 was that a foreigner in the coastal city of Pattaya was caught with a huge cache of drugs.  But it’s Thailand, drugs regularly get seized and foreigners regularly don’t care.  I wouldn’t even be able to tell you which bust it was, because it’s nothing out of the ordinary.

I hadn’t visited Pattaya before, but more importantly, I haven’t been to its airport.  Considering that it’s a less than three hours-drive from Bangkok, I decided to fly from Phuket to Pattaya, spend one night, then return to the capital the next day.

The next day, upon arrival at Bangkok’s Ekkamai bus station, the passengers was greeted by six uniformed someones-or-other.  I say that because I’d always read about fake (tourist) police, so I didn’t think much of it.  That is until they singled me out.  In fact, I tried pushing through them, but their painfully staccato dialogue and returned shoves proved otherwise.

In unison they all loudly blabbed various words and phrases in Thai, expecting me to get the gist.  After two awkward minutes, the leader of the pack spoke to me in Thinglish, while his minions were forcibly taking my bags.  I couldn’t help but notice that the other passengers had already left, presumably because… they know how to conceal drugs?  No, of course not, it was all about profiling.  Then again, who’s a typical drug smuggler in Thailand? 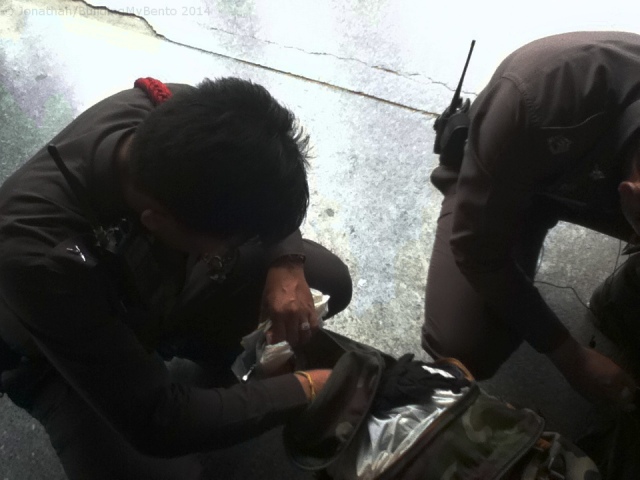 I’m not sure for how long they interrogated me/searched through my backpack/wallet, but damn were they thorough.  I’d like to think that one of the officers laughed at my Delta frequent flier card – those things are worthless no matter which country you’re in – but no.  However, the man-in-charge slowly realized that I was just another bored (spoiled?) farang, and started to show me photos of the recent seizure of drugs.  That was also when I somehow snapped the photo above – so, how thorough were they? – hmm, I wish they kept most of the stuff in there- who wants a receipt from a Tokyo restaurant from 2005?

Coincidentally, I would be stopped three more times that year, all for the same reason (but twice at night, so no sunglasses), though luckily one of those times I was with an impatient taxi driver.  To say that I have an even less thrilling opinion of Thailand these days would be an understatement, but that’s hardly my only reason.  Still, I was never stopped before that year, and haven’t been stopped since, so if it’s only for a one night layover to get some European chocolate and Egyptian food, I won’t complain too much.

Bread, olive oil Waking up in Nakagin Sure does sound like me
View all posts by LearningFeelsGood →
This entry was posted in East & Southeast Asia, Food & Drink, Human Nature, pop culture and tagged backpack, Bangkok, drugs, Thailand. Bookmark the permalink.