Posted on June 3, 2014 by NoWorkAndAllTravel

If someone asked me what I wanted on my tombstone, I probably wouldn’t respond.

Don’t worry, dear readers!  Tombstone is a brand of frozen pizza.  Who were they kidding though?  Advertising frozen pizza to someone raised near New York City?  Whether it was them, Ellio’s or DiGigorno – that’s all I can remember from watching tv commercials as a child – did they even use mozzarella cheese?  Even more confusing is that I remember eating Ellio’s on a number of occasions…let’s hope it was only when pizzerias were closed, say for Christmas or on the day honoring the fellow with an alliterative name.

It warrants mention that, even though I’m a New Yorker, I’m not here to debate which place has the superlative slice or pie  (Anyway, thus far, it’s New Haven, Connecticut…).  So Chicagoans, although I don’t like using a fork when chowing on pizza, your food contribution is still valid.  Not you, however.  Your sweetened adzuki bean entry was disgusting.

Rather, let’s peruse a few examples of what constitutes pizza around the US and a couple of wildcards (apologies in advance, as some photos were taken with the iForgotMyCamera):

Buffalo, New York: If you visit New York, please remember that there’s more to the state than Gotham.  For instance, we have Buffalo, where slices are served piping hot and with condiments carefully raided from the nearest Subway sandwich franchise.  Stay tuned tomorrow for a slice of ripped latex glove.

Cambridge, Massachusetts:  Ricotta, sweet potatoes and cranberries.  I had this in May, so what was in season?  Guess I was channeling my nonexistent New England roots.  I can’t recall the take-out place’s name, but it’s in Harvard Square. 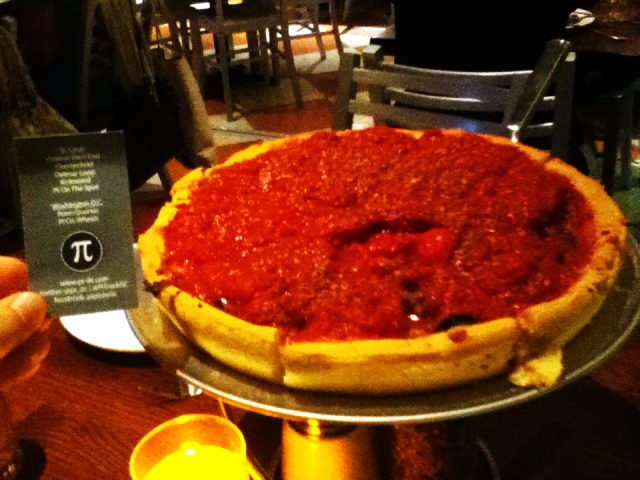 Washington, D.C.: District of Pi, a St. Louis-based chain, set up shop in DC too.  Their claim to fame is that they add cornmeal to the crust.  The cornmeal provided a nice hint of sweetness, and overall the pie was tasty. If you’re looking to impress a client/woman/Jeopardy! host with your knowledge of Missourian delicacies, read up on Provel.

New Haven, Connecticut: The star of this list.  You can’t get a slice though, unless you want to get chewed out by restaurant employees.  Bad pun, I know.

The Little Italy of this college town is centered around Wooster St., and it is there that you can find Pepe’s pizza.  I’ve gone through a bunch of their toppings – including “plain” and the summer seasonal clams and garlic – and have yet to find a blip.  The Foxon Park soda from East Haven, CT is a bonus, though some patrons might prefer a bottle of this import.

Florence, Italy: Olives and artichokes.  But it’s in Italy, so that’s a start. Rectangles seem to be a popular shape in the boot, and the first type I recall eating was in Rome, with boiled potatoes as the topping.

Nyaung U, Myanmar (Burma): My girlfriend-at-the-time and I became tired of getting sick from Burmese food, so we decided to get sick from Italian food for a change.  Even for the randomness of the location – and at the time, in spite of heavy sanctions – it wasn’t the worst pie.  Good lime and ginger juice accompanied it, and the tomato and zucchini salad was mightily inviting.

–
Based on this brief guide to pizza around the world, what’s your fancy?

Wordpressing about food and languages at FindingFoodFluency.com, and about travel news and attractions at NoWorkAndAllTravel.wordpress.com
View all posts by NoWorkAndAllTravel →
This entry was posted in East & Southeast Asia, Food & Drink, North America (non-NYC) and tagged cheese, eating, food, New York City, pizza, toppings. Bookmark the permalink.