Posted on June 8, 2014 by NoWorkAndAllTravel 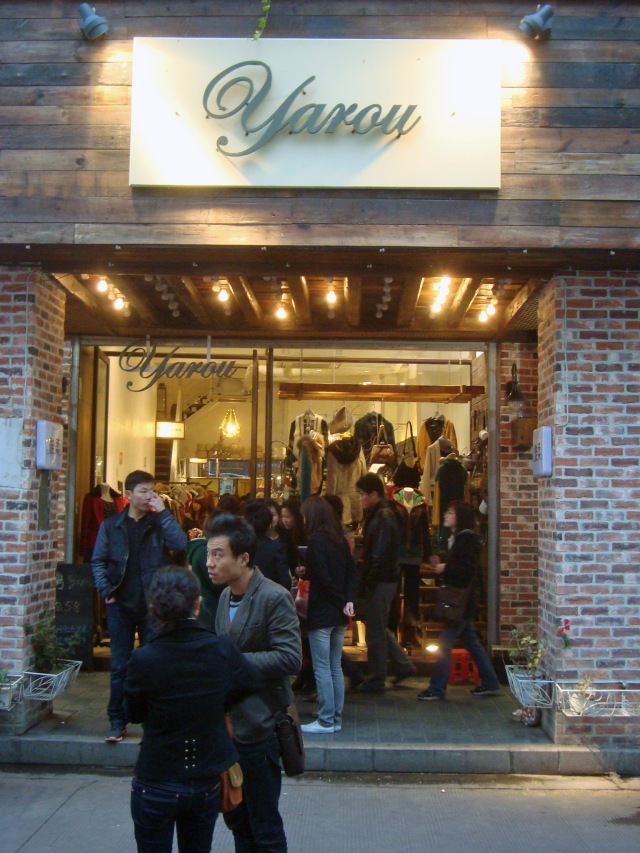 I was ambling through one of the main shopping corridors of Xiamen, China when I ended up in front of Yarou.

Was the woman in the light blue jeans clapping before I got there?  That’s how you know A) You’re in China and 2) Since you’re in China, the International Olympic Committee should be taking notes.

However, it’s not the ambiance we’ll be focusing on so much as the store name itself.  Depending on your comprehension of Chinese and Japanese, Yarou may just be another place to buy clothes that don’t adequately fit Westerners.  But for your viewing pleasure, I will treat you to another language lesson today:

Sticking with Chinese first, Yarou could mean 鸭肉 (yāròu), or duck meat.  Is that Chinese slang for cotton?  No.  Thus, I don’t think that was the store owner’s goal.

But then there’s Japanese.  The relationship between China and Japan, amigos ’til the end, might have influenced this shop name.  The most harmless definition of yarou – やろう (pronounced as ya-rou) – refers to a type of wild yam.  Moving on… it’s also slang from the Kansai region of Japan, better known as the location of Osaka.  It means “seems like” or “I guess (so).”  We’re not making progress yet.

Then there’s 野老, which literally means “field old.”  In other words, it’s an elderly man living in a rural area.  In other words, what does that have to do with a shop selling women’s clothing?  Scratch it off the list.

For the last guess, let’s make it a good one.  First things first– why do many of us yearn to learn the bad words in a language before understanding how to utter a sentence?  If movies are one of the main sources of language study, should we then be forgiven if certain words are easier to remember simply because they are frequently repeated?  But then, are those the only movies/programs available?  No, and that’s a topic for another time.

Now, to attempt a relatively smooth transition, the last yarou may be 野郎, which could stand for guy, but more commonly denotes a bastard/s.o.b.  If someone with flared nostrils says this to you, duck for cover.

On the other hand, is it merely a clothing store?  Let’s go with yes.

Wordpressing about food and languages at FindingFoodFluency.com, and about travel news and attractions at NoWorkAndAllTravel.wordpress.com
View all posts by NoWorkAndAllTravel →
This entry was posted in China & Hong Kong, East & Southeast Asia, Languages and tagged China, Chinese, japanese, language, store, Xiamen. Bookmark the permalink.