From the Big Apple to the Great Firewall

Posted on June 22, 2014 by NoWorkAndAllTravel

Nope, no political statements intended in the title.  However, in case you wanted to know, the Big Apple generally refers to New York City, and Great Firewall ends with of China.  Just how are we going to now tie these two ideas together?  Let’s find out.

I’ve previously mentioned that I’m no friend of window seats.  But if the configuration of airplane seats is 2-2 – or 1 and nothing… – and if I can ever be warned enough in advance without fumbling for my camera (blurry photos?  ¡gracias, no!), then flying wouldn’t be so bad.

Well, on the unusual occasion that an airline decides to (unintentionally?) play the role of killjoy, I become snap-happy.  I’ve never seen a cloud before, or a sky, or an edible airline meal, or another passenger’s nape.  So, take hundreds of photos of them!  Try to play a game with your family and friends.  Whoever lasts the longest through your photos gets to delete any photo he/she sees fit.  Unless of course, you were only able to get one in:

Hurriedly snapped on a flight between Kota Kinabalu, Malaysia and Hong Kong, I immediately though of the New York island of Manhattan.  Do you notice the resemblance?  The New York section of “The World” in Dubai clearly lacks verisimilitude when compared to this one, don’t you think?  (Also notice how, in “The World,” there are about two or three Japans.  China and the Koreas are not amused.) 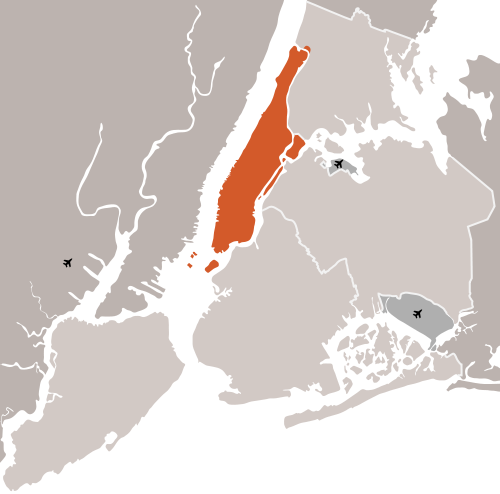 Speaking of China, if you track the average route that a flight from Kota Kinabalu to Hong Kong takes, it passes right over the Spratly and Paracel Islands.  These days, the real Manhattan seems as if its another rapidly developing mainland Chinese city – extensive public transit, but nothing else carried out with humans in mind  – so it would make sense if the carbon copy was located in one of those archipelagos…

If you know the whereabouts of this North American expat (not me, silly), please post a link below to a map showing its location.

Wordpressing about food and languages at FindingFoodFluency.com, and about travel news and attractions at NoWorkAndAllTravel.wordpress.com
View all posts by NoWorkAndAllTravel →
This entry was posted in (Inhuman) Nature?, Aviation, East & Southeast Asia and tagged airplane, flying, island, Manhattan, New York City, photo. Bookmark the permalink.

1 Response to From the Big Apple to the Great Firewall