Posted on February 7, 2015 by NoWorkAndAllTravel 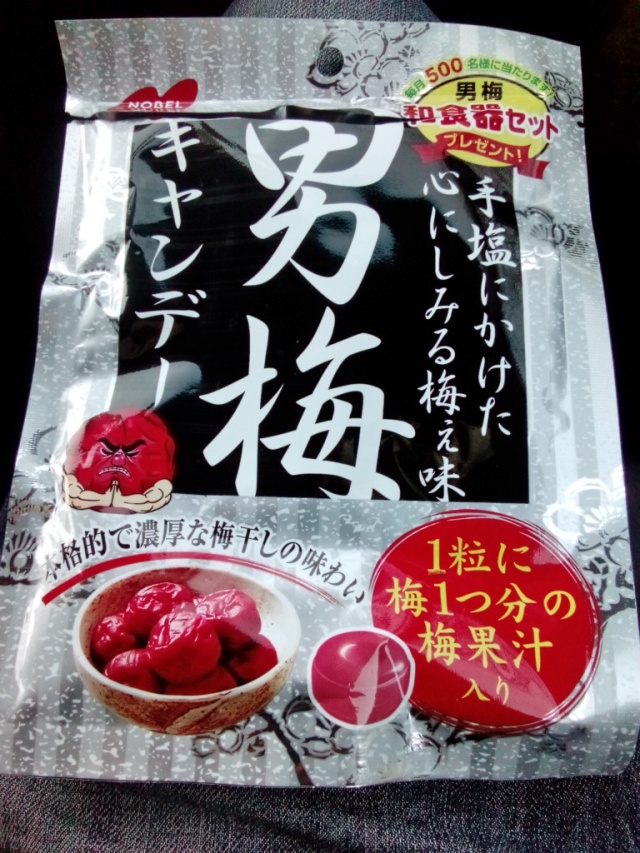 The real question is, what is that?  Before even touching upon what the candy above tastes like and why there are so many different topics written all over the packaging – the one in the upper right hints at receiving a Japanese kitchenware gift – Plum Man is the mascot introduced by the Nobel company located close to the lower-left part of the bag.  What does it do?  It’s a Junichiro-of-all-trades, I guess.

As for the taste, umeboshi – yes, that same umeboshi in the BuildingMyBento header – with a hint of shiso.  That is to say, pickled plum and… shiso?  Shiso, also known as perilla, is an herb that not only has antiseptic properties, but is also used to add a light red hue to umeboshi.  Imagine a sweetened version of that pair, combined with MSG, and you get a flavor that may be an acquired taste to those who tend towards this instead of this.  Possibly.

It’s a candy that I could get used to, except that at the time I was eating it I was also enjoying one of the few remaining reasons to visit the Mitsuwa Marketplace in Edgewater, New Jersey, Boloniya bread.  Perhaps there’s a more convenient place to buy a bag of either food in New York City, but that bread is grossly addictive.  How are the two related?  They’re not, but I had to mention the bread, because I usually finish it too quickly before taking a photo for the blog.

How does this sour plum candy sound to you?