My First Meal in Russia

Posted on September 18, 2015 by NoWorkAndAllTravel

How easily are you able to recall your first “something?”  Don’t let your imagination run too freely there…you know what, I’m just going to skip ahead and say that the focus of today’s post is food.

I wish I could remember my first meal for Indonesia, Japan and China, but even though that’s nigh on impossible, at least Puerto Rico’s comes through.

And…considering that I was there quite recently, my lunch in St. Petersburg, Russia stands out.  (Putting photos in chronological order helps too.)

My hotel wasn’t in the busiest part of town, but nearby there were the expected kebab huts and Georgian restaurants, but I couldn’t yet capitulate to the stuff I already knew and enjoyed.  What is Russian food?  It’s an ongoing discovery.

In any event, the hotel was also near a столовая (stolovaya), or cafeteria/canteen, a good candidate to try something local: 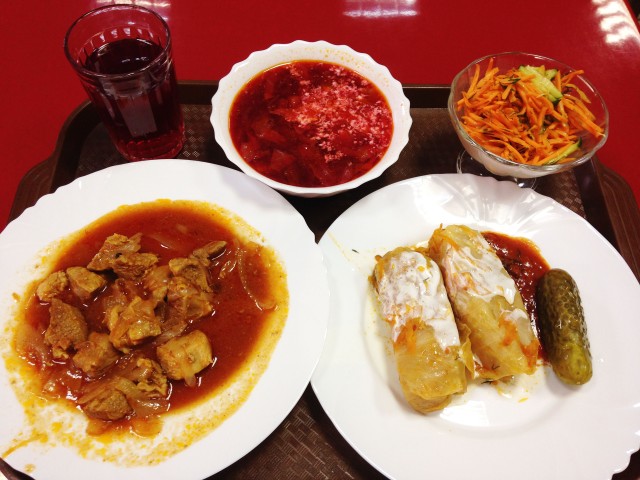 But how much of it was Russian?  Let’s not delve into semantics right now, but one of the stolovaya workers – after sticking her tongue out at me but before giving me a hard time – mentioned that the borscht, the beet soup in the upper part of the picture, is more Ukrainian than anything else.

I also chose stuffed cabbage with pickles, garlicky carrots with dill, Russia’s favorite herb, and a mysterious beef and onion stew.  The drink is called морс (morse), and it is usually made from berries and sugar syrup.  Another patron at the cafeteria told me that “mors is good for womAn.”  That settles that.

I realized that restaurants in Russia seemed to charge for every little thing, in particular small servings of various sauces.  Supposedly it cuts down on waste, but I couldn’t help but recite to myself “profit margins” after every order of ajika.

Do you think this was an appropriate first meal for Russia?

Wordpressing about food and languages at FindingFoodFluency.com, and about travel news and attractions at NoWorkAndAllTravel.wordpress.com
View all posts by NoWorkAndAllTravel →
This entry was posted in Europe, Food & Drink and tagged cafeteria, first, food, meal, Russia, St. Petersburg, what was your first meal?. Bookmark the permalink.

5 Responses to My First Meal in Russia