Posted on April 12, 2016 by LearningFeelsGood

Disclaimer: In exchange for an event review, I received a press pass. 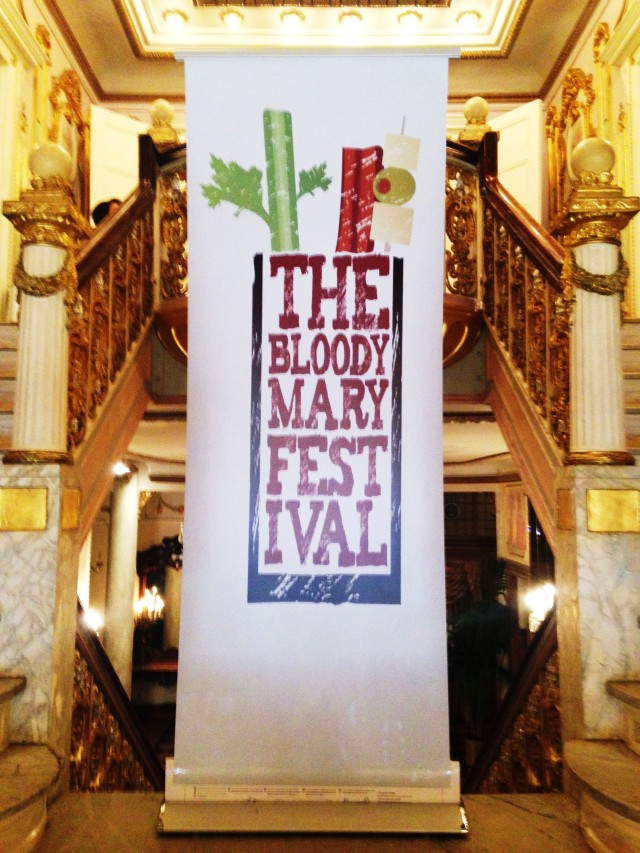 Although a wine and Fernet Branca festival (individually served, that is) would be more up my alley, tomato juice and vodka mixed with various savory ingredients also gets my vote.  Does such an event exist honoring said sanguine cocktail?

It sure does.  Enter, The Bloody Mary Festival.  Even though it just took place on April 10 at The Grand Prospect Hall in Brooklyn, New York, there will be similar festivals in other cities around the US later this year.

ICYMI – or were a bit too tipsy to remember it – take a peek at some photos of the drinks, the bagel bar, and a couple of stalls offering slightly less intoxicating consumables…

The bagel bar, aka the epicenter of Glutenstan.  It’s advisable to come here after every two-three rounds…but what’s with the lack of artisanal, organic, and locavore cream cheese?  We’re in neo-Brooklyn, no? 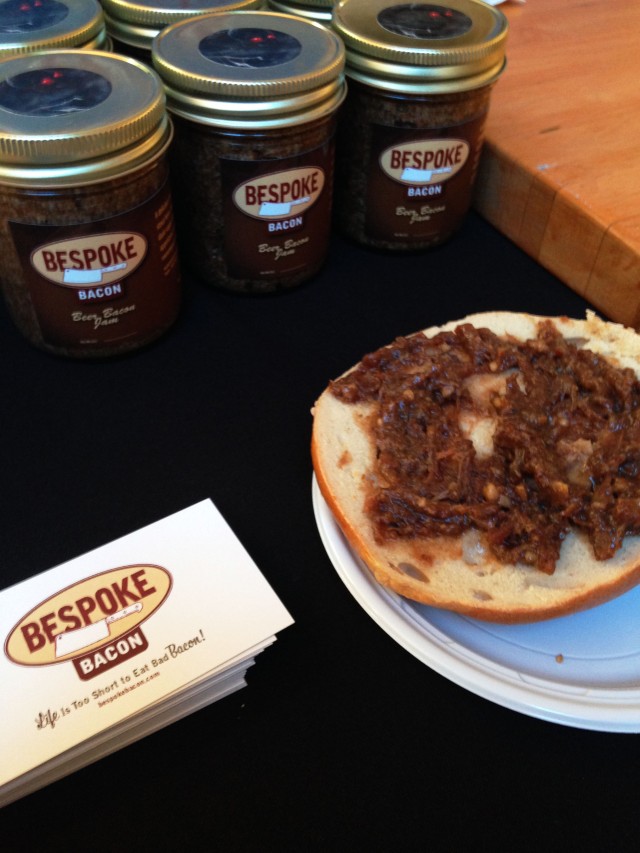 Ghost pepper bacon jam, by Bespoke Bacon.  A New York tradition, spreading pork on a bagel.  Something about that doesn’t seem right. 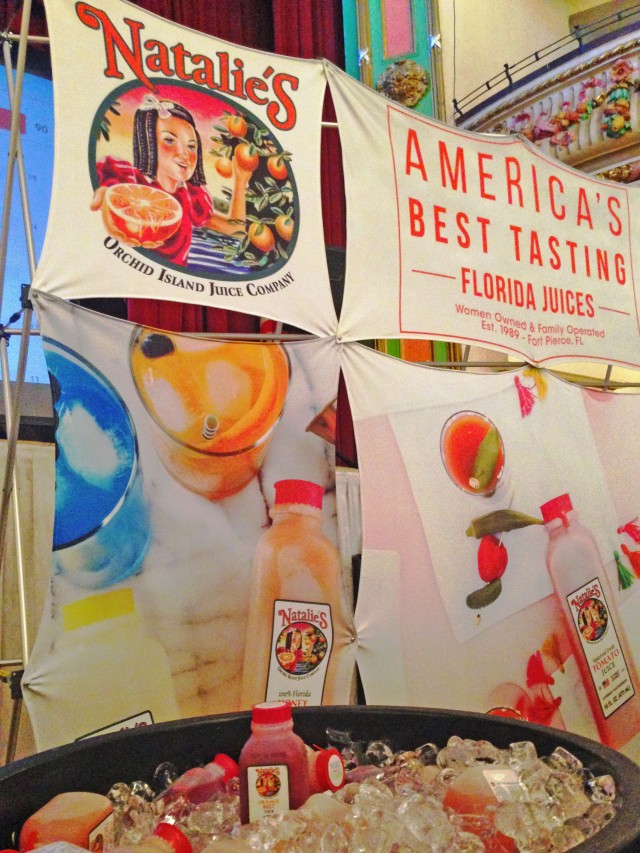 In keeping with the theme of the show, Natalie’s Orchid Juice Company had glasses of mostly unadulterated tomato juice to try, as well as bottles of a few other juices.  Though I dug the tomato, I really like their orange beet juice. 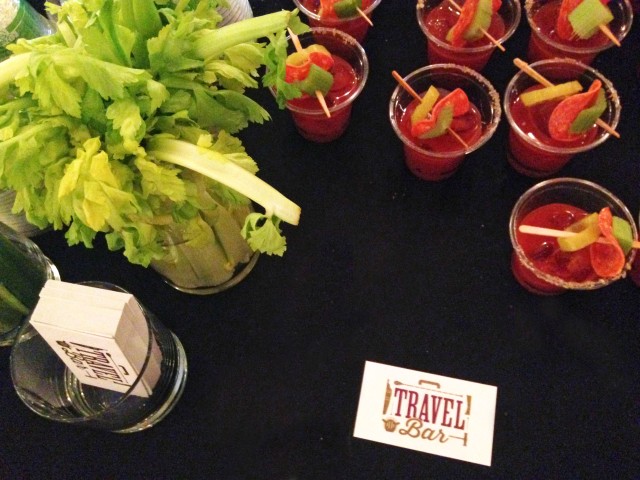 On with the main event…the Bloody Mary.  On the whole, I didn’t like any that I tried; they were all far too sweet.  That said, each restaurant/bar had some nice accoutrement to go with the cocktail.    Travel Bar‘s (Carroll Gardens, Brooklyn) example had a pickled pepper, celery and salami, along with a salted rim.

Hunter’s (Cobble Hill, Brooklyn) tested a lemongrass-infused vodka with pickled shrimp and cucumber as a garnish.  Everyone should have set up a garnish-bar, because that’s where the real fun was.

Lucky Luna (Williamsburg, Brooklyn) , serving up Mexican-Taiwanese fusion (stinky tofu menudo, anyone?), had a Korean-influenced kimchi-filled and nori-flecked Bloody Mary.  This might have been my favorite of the show, though it was still on the sweet side. 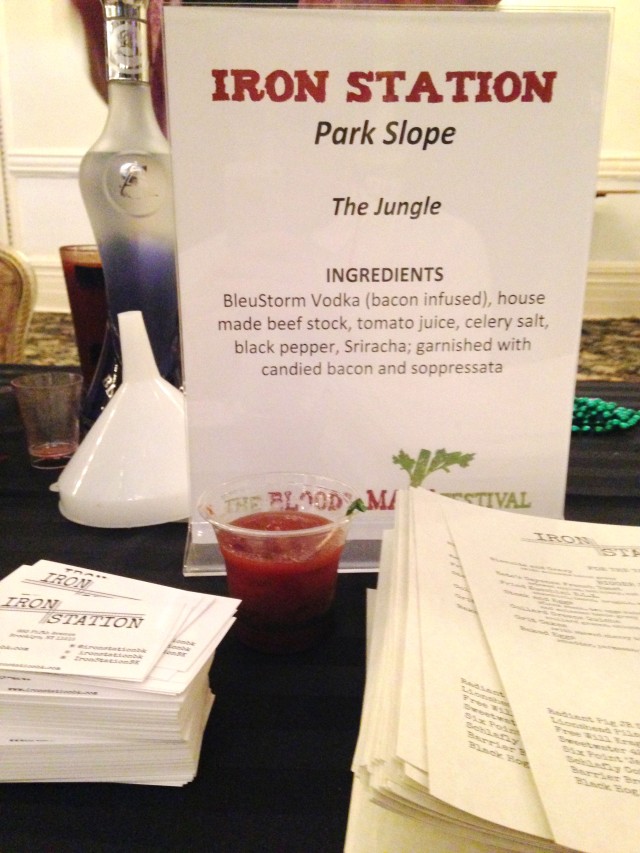 Iron Station (South Slope, Brooklyn) went heavy on the carnivorous side, particularly with the inclusion of beef stock mixed in with the tomato juice and vodka.  Trivia for the day: the first drink I ever tried was a Bullshot, which is beef stock and vodka.  Thanks, pa.