Posted on January 9, 2017 by findingfoodfluently

Disclaimer: In exchange for this hotel review, I received a two nights-stay in Riyadh, Saudi Arabia in one of The Ritz-Carlton‘s superior rooms.  Additionally, this will be one in a two-part series; the first will be of the hotel and the room, and the second, the food.

Only completed in 2011, the Ritz-Carlton Riyadh is located in the diplomatic quarter of the Saudi Arabian capital.  It’s safe, quiet, and rather detached even if not terribly far distance-wise from the city center.  In addition to its 493 rooms, meeting rooms, ballrooms, a males-only indoor pool and spa, and business center are available.

Oh, and did I mention that the Ritz-Carlton Riyadh was originally built as a palace to welcome dignitaries?  Well, who’s to say it doesn’t serve that purpose anyway?… 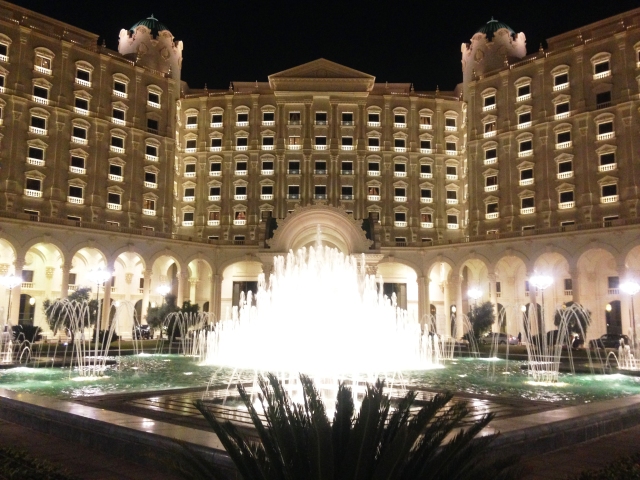 Before you can reach the lobby entrance, there is a security checkpoint.  Though some may consider it a minor nuisance or impractical, I think its best purpose is to build up the excitement as you approach the hotel.

The lobby and main corridors were immaculately maintained.  Although these photos were taken around 3:30 in the morning, even when the check-in/café areas became busy, it never seemed that way; indeed, the high ceilings and huge amounts of space are two reasons why.  Depending on when you check in, dates and Saudi cardamom-infused coffee, called qahwah, are offered right by the front desk.

Checking-in was easy; the front desk agent said that they were expecting me; no sooner than twenty seconds later, the nice Nepalese porter who took my bag from the taxi was already leading the way to my room.  Though I typically don’t like having to fumble for my room key to push the floor in the elevator, because the key card scanner worked fine, it was no issue. 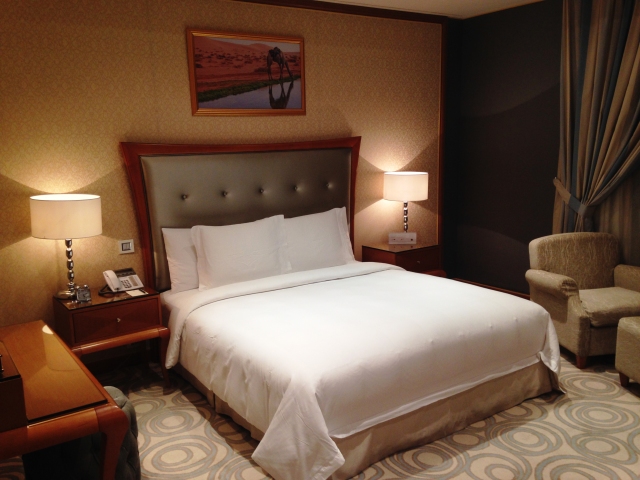 My room.  I suppose I expected something more elegant, but that’s neither here nor there. More importantly, the room at the Ritz-Carlton Riyadh was clean, comfortable, and had a very welcoming bed.  Perhaps what was most notably (to me, anyhow) absent was a device through which to play one’s smartphone/mp3 player music.

The wi-fi wasn’t working at first (there’s typically a charge for it, unless you have a certain status with Ritz/Marriott International/Starwood Hotels & Resorts), but a fast chat at the front desk resolved it.

However, the following night, I received three calls within fifteen minutes asking about the internet/other possible issues with my stay.  If I had a problem arise during my time at the hotel, I would be proactive about fixing it.

The bathroom was well-kept, the shower had great pressure and amenities were of the British brand Asprey.  Also, in case you didn’t want to your favorite tv program, there’s a another speaker in the bathroom.

Upon reflection – pun unintended – I should have removed the wrapping from the delightful edibles awaiting my arrival.  But, food safety is key, too…

On the left, some quality hotel-made baklava.  On the right, Saudi dates (from top to bottom) with peanuts/peanut butter, coconut, pistachios, and I believe sumac.  Dates will come up again in the next Ritz-Carlton Riyadh post.

The Nepalese assistant then took me on a bit of a tour around the hotel.  The pool was the main stop: 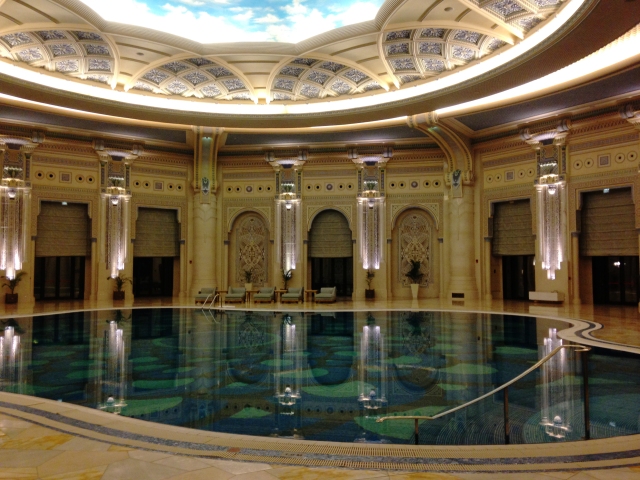 In spite of its warm temperature and extremely inviting ambience, lest you forget that it’s only for men to use.  Two restaurants – welcoming both genders – flank the left and right sides of this photo; they’re only open in the evening – after the pool has closed.  Still, if I had brought a bathing suit, the pool would’ve been a refreshing option.

I’ll finish the first review with the Saudi coat of arms – a palm tree with two swords representing the Najd and Hejaz kingdoms united in 1926 – superimposed over the lobby/Chorisia lounge.

Overall, service was good, if slightly rough around the edges.  I had good conversations with some of the Saudi staff, and Kristian, one of the bellhops, was quite helpful. Save for the somewhat secluded nature of the Ritz-Carlton Riyadh, the internet flub and mostly ceremonial security checks, I’m confident in being able to recommend this hotel to anyone looking for a quiet stay in Saudi Arabia’s largest city.  Or, would it be better to endorse just a visit to the hotel and the breakfast buffet more?…we shall see!