Posted on May 25, 2017 by findingfoodfluently

Disclaimer: In exchange for a menu sampling, I am writing this restaurant review.

I was first introduced to Untamed Sandwiches two years ago, after being invited by Urban Oyster Tours to check out the Times Square-area food scene.  Yes, as a New Yorker it really didn’t sound like such a great plan- that is, voluntarily walking to that part of town.  In fact, the tour was well-done, and the grub along the way worked, too.

Fast forward to last week, when I was unexpectedly reintroduced to Untamed Sandwiches at The Village Voice Choice Eats event.  As noted in that review, they were one of the few bright spots of the night.

You may think, sandwiches?  In New York?  Talk about untamed…even some Indian and Taiwanese places – perhaps not best known (overseas) for that meal – are getting into the mix.  There’s no dearth of places to eat something, err sandwiched between carbs, but if you’re looking for a reliable choice, let’s see what Untamed Sandwiches has in store.

They have two locations right now – one in Manhattan near Bryant Park (43 West 39th St., between 5th and 6th Aves.), and one in Brooklyn (60 Prospect Street., pretty much between the Manhattan and Brooklyn Bridges).  A third branch – in Manhattan – should be opening within the next few months, close to the Citigroup Center in Midtown East (near Lexington Ave. and 53rd/54th Sts.).  The two current Untamed Sandwiches offer breakfast, lunch/dinner, and a weekend brunch.

As photographed above, I visited by the Bryant Park location.

At first glance, the restaurant was clean, airy, and seemed like a pal to the environment, or at least as much as a Manhattan eatery could be. Why do I say this?  They had separate containers for “compost, recycling, and trash,” and consider themselves to be sustainable, letting animals graze and eat what they want, and utilizing crops free of chemicals and pesticides.

Cool, so let’s move onto the food.  John, the affable general manager, informed me that the side dishes are seasonal, and that one new sandwich is added roughly every 6-8 weeks, depending on its popularity.  The chalkboard menu was easy to read, and they offer both non-alcoholic and alcoholic drinks.

On the right, as it’s getting to be bbq season, we have the Yukon gold potato salad with deviled eggs and smoked Aleppo pepper.  Although the potatoes and Aleppo pepper were satisfying, I didn’t enjoy the taste of the deviled eggs this time.  Perhaps if there were more herbs added, or a non-mayonnaise version, I’d be more inclined to try it. 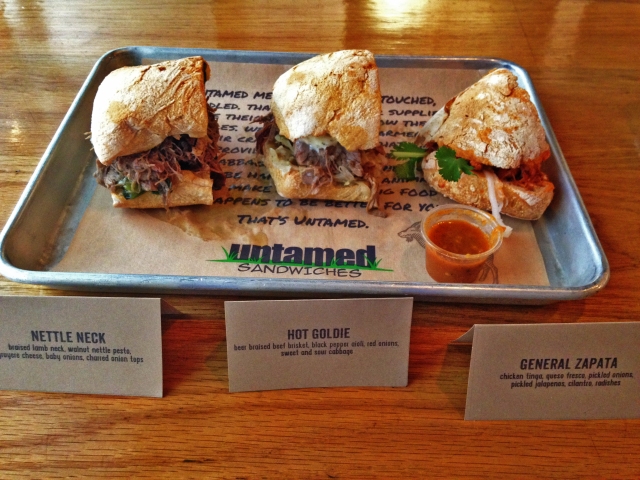 As part of the Untamed Sandwiches menu sampling, I ordered a half-sized Nettle Neck – with lamb, Gruyère, and onions, the limited time Hot Goldie – with beer-braised brisket, black pepper aïoli and cabbage, and the General Zapata – with shredded chicken (tingas), queso fresco, and pickled jalapeños.

The Nettle Neck reminded me of a sandwich version of French Onion soup, being a bit rich and enjoyable for cooler days.  The Hot Goldie warped me back in time to (what I imagine to be) a halcyon New York deli; the brisket was very flavorful and properly cooked, with the cabbage’s adaptable flavor profile blending well with the black pepper.  Come to think of it, the General Zapata was the first sandwich I tried two years ago – pickled jalapeños are one of my many food weaknesses; heck, if they offered a pickled jalapeño, Oaxaca cheese, refried pintos, and avocado sandwich, that would’ve been good enough.  Can’t complain though, for broadly Mexican flavors are some of the easiest sells for me.

I believe that the bread is one of the most important factors in a sandwich – who would’ve thought? – and Untamed Sandwiches hits a home run with their rolls.  Crusty, crunchy, and supportive of the ingredients, that bread does it well.  Gluten-free rolls are also available.

John proudly and knowledgeably spoke about each item on the menu.  I told him I wanted something spicy to add to the sandwiches, so he threw in a container of their not well-published but quite nice homemade habanero sauce.

The good eats don’t stop with the savories.  With Urban Oyster Tours, I remember eagerly scarfing down the Untamed Sandwich salty chocolate cookie.  This time, John recommended – based on yearning to eat all things spicy – the Aleppo (pepper) peanut cookie.  Good choice, to be sure.  Although there was only a very small hint of spice, peanut cookies are another food weakness.  Their menu might even be worth doing a cookie sampling some other time.

If you’re in the market for approachable and tasty sandwiches in a casual, orderly atmosphere, check out Untamed Sandwiches. Be warned, that you may also want to start and end the meal with one of their cookies.

Thanks again to John and Andy for helping to arrange this!