Posted on May 5, 2019 by findingfoodfluently

Disclaimer: In exchange for a one night’s stay in the Raffles Room with dinner at the Raffles Jakarta, I am writing this review.

My colleague was interested in visiting the Indonesian megalopolis, so as a former resident, I was glad to show him around.  On previous visits, I would stay closer to the main tourist drag, also known as Jalan Thamrin.  However, what better way to explore more of the city than to choose a new neighborhood?  Hence, I bring you, the Raffles Jakarta, part of the Singaporean Raffles hotel enterprise. 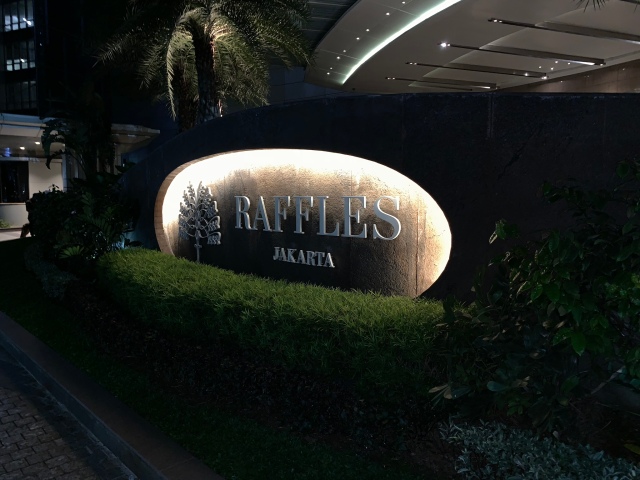 Located in the commercial and shopping district known as Kuningan, the hotel also forms part of the Ciputra World mall and dining complex.  Due to travel issues, we arrived in the early evening, but we were very glad to be leaving the crazy traffic for the welcoming calm of the Raffles Jakarta. 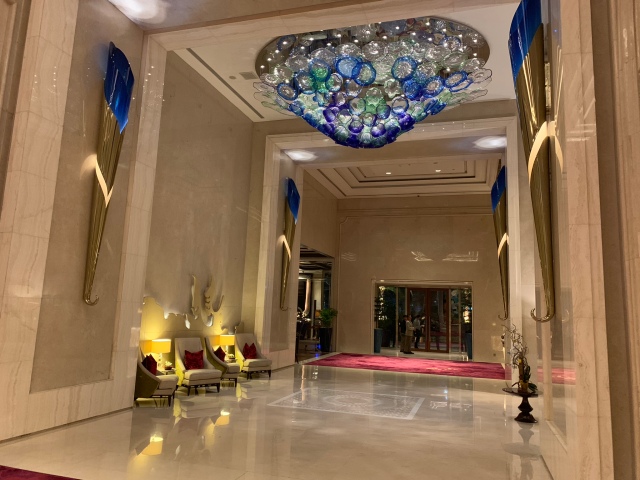 After passing through the harmless security check at the front (it’s the standard for nice hotels and shopping centers in Jakarta), the first thing I noticed about the lobby – and the hotel in general – was that it was warm.  I’m not staying at a hotel in this part of the world expecting the temperature to be on par with the outside temperature at the time of the day!

Also, I found some of the works of art – curated by the hotel owner, Ciputra and his family – to be unappealing and lewd.  One of the bellhops also pointed out that many things also had a golden hue, as if to signify wealth.  That was another tacky choice on the part of the owner…but being familiar with East Asia, I wasn’t at all surprised. 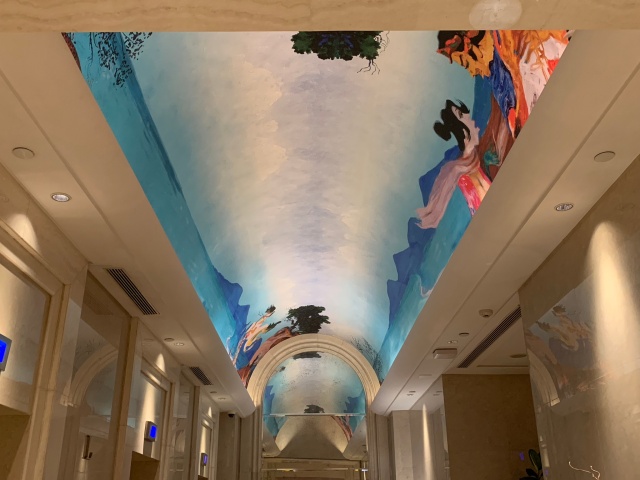 Though, I must say that all public areas, as well as the room and main dining room were very clean and well-maintained.

At check-in, we were introduced to our butler, which I wasn’t expecting.  That said, my preferred level of service is “let me ask you when I need something”, as opposed to “contact me if you think I need something.”  Anyway, we were told that the butler could unpack our bags, make us tea and coffee, polish our shoes, and press clothes.  Nice touch, just like at its flagship Singapore property (or so I’ve read).

The room was spotless, hospitable, and spacious.  I wish that I had more time, because it was one of the three highlights of the Raffles Jakarta.  The shower had good pressure, the wifi never cut out (which is still an issue in Jakarta/Indonesia), and the robe…I should have asked to buy one!  Different color, of course…the Raffles Room was also quiet, and had nice views of the surrounding Kuningan area, as well as the Sudirman central business district (I apologize, as I accidentally deleted those photos).

Before eating, I wanted to check out the pool; that peaceful area turned out to be the second highlight of the Raffles Jakarta: 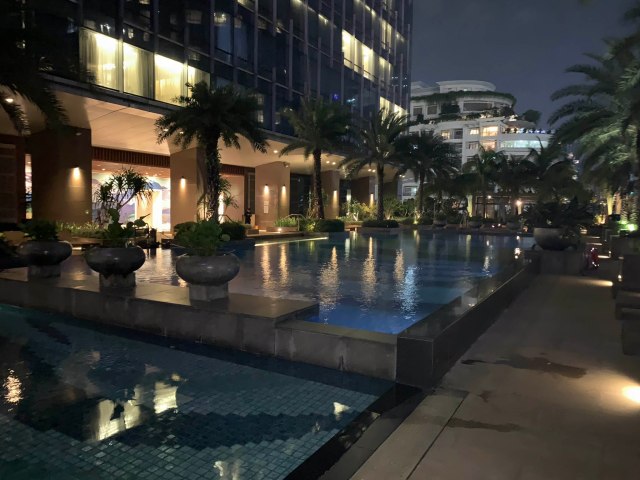 Although the water was a bit cool, in the steamy Jakarta climate, it was a brief but delectable swim.  It was around closing time, so no one was at the pool, which might’ve added to my positive opinion of the space, but for that moment, I felt blissfully removed from the giant city at the hotel’s doorstep.

Now, let’s finally move on to the food, at the Arts Café…

On second thought, let’s move away from the food.  It was mostly disappointing, save for the local and Western desserts, which were actually surprisingly tasty.

The “show kitchen,” in which three different dishes are churned out on a daily basis, were almost flavorless across the board, and the Peking duck lacked the best part, the duck skin, as well as had very small portions.  To sum up the buffet, if it didn’t have to be cooked, it was good.  If it was a dessert, it was good.  Anything else, give it a pass.

Though, more irritating was the service.  At first, a waiter would stop by our table, asking if we needed water or anything from the show kitchen.  However, after about fifteen minutes, two different tables of business people (i.e. in suits) were seated, and all of the servers’ attention shifted to them.  I tend to think there was an elitist air about the Arts Café that was also diffuse among lobby staff.

But, it’s also time to move on to the third highlight (of three) at the Raffles Jakarta, The Writers Bar.  The name evokes the colonial era in Singapore, when authors such as W. Somerset Maugham might have been sipping a cocktail while contemplating their next opus.  It is located next to the main hotel entrance, and often has a pianist in tow. 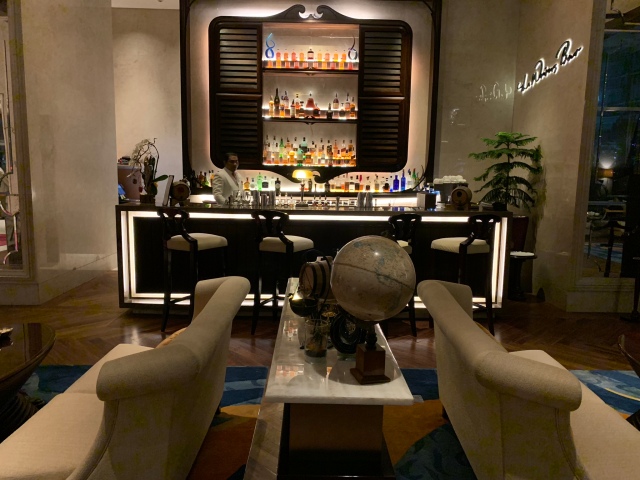 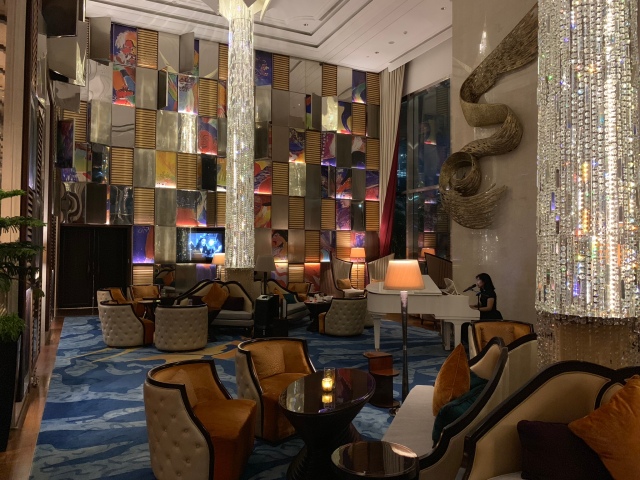 Though I’m not a big drinker, I like to sample local/regional ingredients where possible.  You might be thinking, but Jakarta’s the largest Muslim city in the world’s most populous Muslim country?!  Yes, but calm down.  It’s a very open, cosmopolitan place, with international business people, and a significant Indonesian-Christian population, too.  With that out of the way, let’s have a look at the menu… 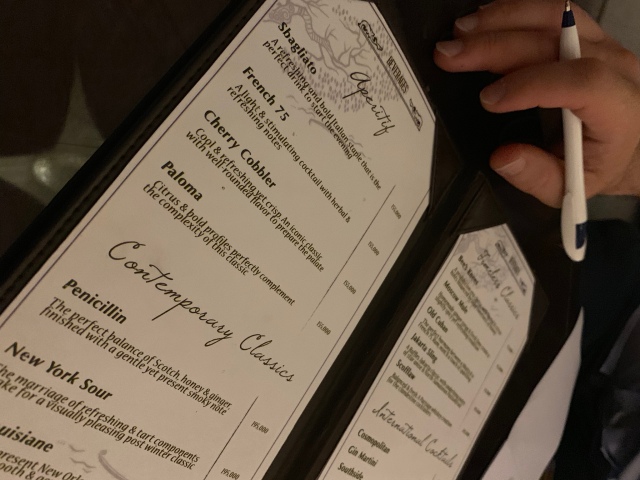 Novita, one of the affable and pleasant waitresses, was telling us about house specialties, in addition to imploring us to try the Jakarta Sling.  I’m a big fan of passion fruit, but had mixed feelings about the star anise; nevertheless, the combination went well.  So well, in fact that I drank it all before remembering to get a photo if it.

No matter, for I also tried the Bramble.  The lead bartender, Rick, and Novita came over with their bar trolley to make the drink: 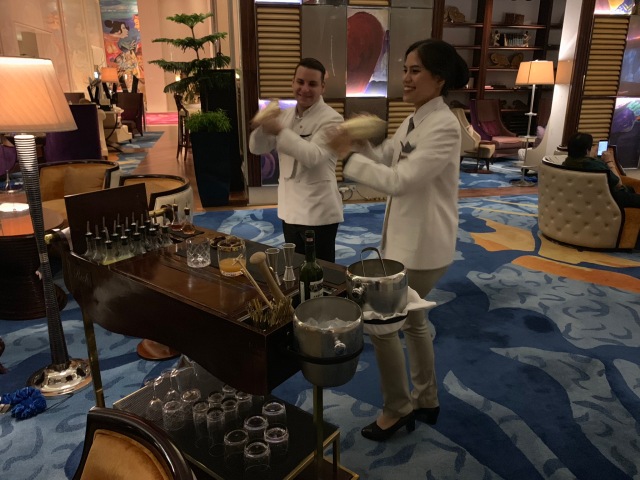 The Bramble has a base of gin, with Javanese mulberries and citrus juice.

The Writers Bar was a nice place to spend a couple of years, relaxing (without the ubiquitous-in-Indonesia kretek, or clove cigarette smoke made it that much better), and chatting with bar staff.  They also have an outdoor section for smokers, and a small library with books about Ciputra and Raffles lore. 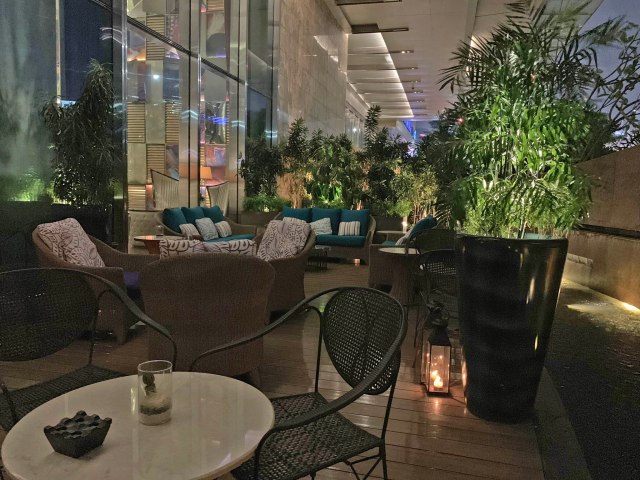 —
All in all, I’d return to the Raffles Jakarta for the room, The Writers Bar, and the pool.  Whereas there was a hint of smugness in the air, that all but disappeared in the The Writers Bar.  I’d also like to especially thank Novita, Rick, and the rest of the bar personnel for their kind and attentive service, and the staff who helped us to our room.