The Haughtiest of Escalators

Posted on July 31, 2012 by findingfoodfluently

My pace is undeniably Manhattan.  Although Tokyo and Hong Kong offer similarly rushed/get the heck-outta-my-way gaits (though Tokyo gets top marks for actually obeying escalator etiquette), here’s a little beginner’s guide to China: TAKE THE STAIRS.  You won’t find a quieter place than a Chinese metro station stairwell.  Or, if there are two/three escalators going in one-direction, the masses always flock to whichever is “closest” to them.  And because no one dares to start a trend of making two paths on an escalator (although Hong Kong has its moments) or move away once finished using them,  if you are planning a move to somewhere in that part of the world, you will make quick pals with staircases.  I focus on these areas because I have spent a fair bit of time in them; many other places I have traveled to are no different (in their generalized lack of good escalator conduct), and that includes New York City.

Though, the purpose of this post isn’t to critique human nature upon its encounter with mechanized rectangular prisms, rather it is to mention a few proud escalators that inhabit East Asia.  The first of the triumvirate is termed “Central Mid-Levels Escalators.”  The common translation of the Chinese/Cantonese word for escalator (AND elevator) is 电梯 “electric ladder,” which sounds a bit more like chindogu than anything else (Link thanks to tofugu.com).  Described as the world’s longest escalator system (besides me, and disciples of the Superlatives ‘R’ Us cult, who else is keeping track?), it was completed in late 1993 to reduce burgeoning traffic issues in the Central and Western districts of HK island.  Well, the promise hasn’t been kept, but a bevy of foreign restaurants and nightclubs opened up to coincide with the increase in pedestrian traffic.  Also, if you’ve got one of the convenient Octopus cards (a stored-value card) and are walking through part of the escalator system, there’s a place to swipe for a small rebate. 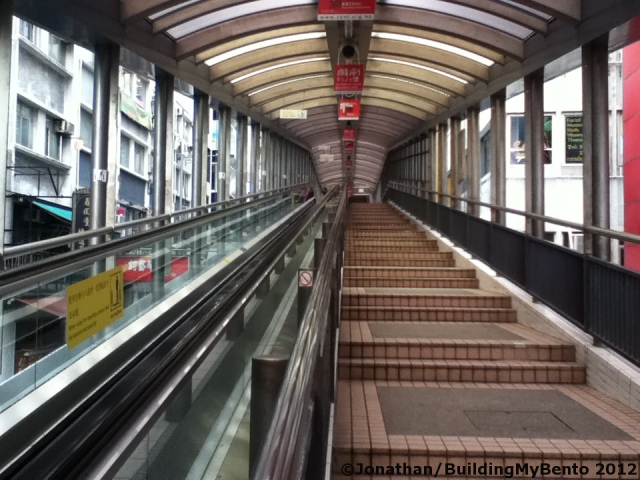 Do you think all escalators have a raison d’être?  That is, would an escalator ever question its own existence?  If you think some would, you might want to have gulliver checked out.  Supposedly the world’s shortest escalator, you might have heard about Kawasaki, Japan’s puttering entry on the list, courtesy of VirtualTourist.  That it’s on a list of overrated attractions makes you wonder what else Kawasaki has going for it, but in case you’ve seen everything in Tokyo and Yokohama, there’s always the Odakaya More’s department store, where this diminutive can be found (unfortunately, due to the March 11th, 2011 disasters in Tohoku, Japan, the specimen was out of service.  I vow to return):

China wanted in on the fun too.  Quite possibly the longest escalator in Asia (not quite the world, but a good start, nonetheless), Chongqing’s rugged, hilly terrain greatly influenced its construction (as a result, if you tire of getting brushed by two-wheeled stereotypes on the mainland, but you  also want very strong calves, this may be the right city for you).  The system in question connects the main railway station in Caiyunba with smoggy neighborhood #444, or Lianglukou.  Unlike the other two misfits, there is an entrance fee of about ¥2, currently about US$0.31, or Indonesian Rp. 2, 967.

17 Responses to The Haughtiest of Escalators