Posted on August 9, 2012 by NoWorkAndAllTravel

A visit to Ürümqi (a city in Xinjiang, in northwestern China) was supposed to be a sort of homecoming  (Link thanks to china.notspecial.org-that site and this blog post oughta be fun for the Great Firewall).  Er, to clarify, many of the Uighurs, a Moslem people of Turkic descent who form the majority of Xinjiang’s population mistake me for one of them.  To that I say, rachmatin, or thanks.

I’m not here to discuss politics, and considering that their typically spicy cuisine is popular ’round China, while the majority population is enjoying lamb kebabs and pilaf, they aren’t interested in debating it then either.  Besides, they’d rather trample on the Uighur religion instead, stocking “Halal” fridges with Chinese lagers and dressing their children in shirts with images of pigs.  And squeaky shoes. And pants that were circumcised in the back. Oh, I’ve digressed again.

Unfortunately, I only had time to visit Ürümqi, (actually a Mongolian word-can you believe they made it all the way to Hungary?  I’d like to meet someone named Laszlo Khan), so I tried to pack in as much local fare as my tolerance permitted.  Those photos will appear later on, but for now, I’d like to share a few food market scenes, not so much those for a complete meal, but more to show the xilmu-xil, or variety, of saccharine sundries, snacks and swallow’s nest drinks are on sale. 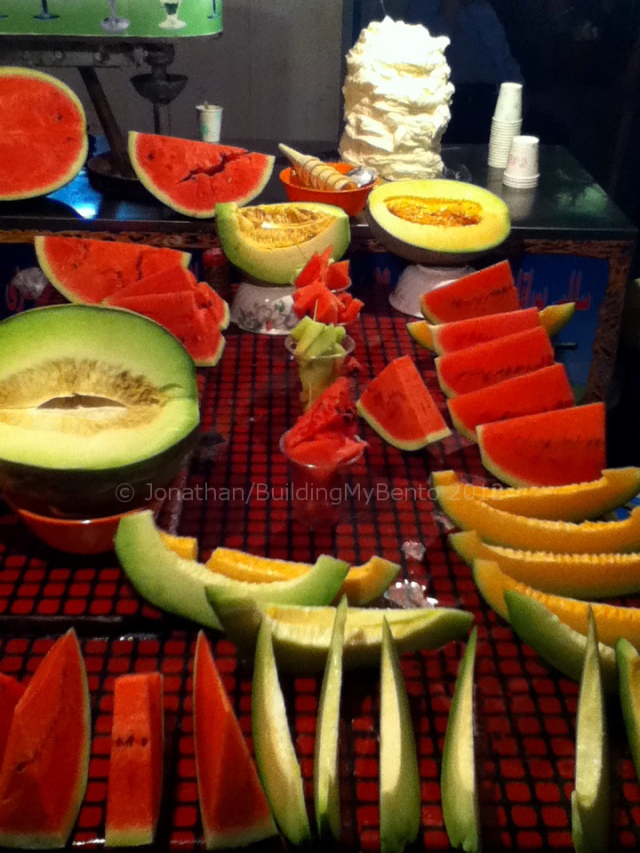 Melons are a Xinjiang staple, and count 哈密瓜 hamigua (Hami melon, from Hami city) among the favorites  (Link where you’ll be more confused after reading thanks to chinaculture.org aka babelfish).  They’re similar to a cantaloupe, maybe a bit drier.  These particular watermelons, argh, they melted in my mouth.  That’s not…refreshing at all.  And the ice cream in the background?  Tasted more like the container they were served in than whatever “ice cream” is supposed to taste like.  It was a combo of buttermilk cardboard and Splenda.  The Uighurs could use a lesson in ice cream production from their Turkish brothers by visiting thethinkingblog’s listing about Kahramanmaraş.

Dried kiwis, bananas, round things, stale things, biscuits, walnuts, and a bunch of raisins whose colors were edited with Photoshop.  The lady from Sichuan let me try just about anvrything, and I’m not even sure she worked there.  The items two above the goji berries (the red things on the right in the foreground) remind me of the “stones” of Johannesburg’s street food scene. 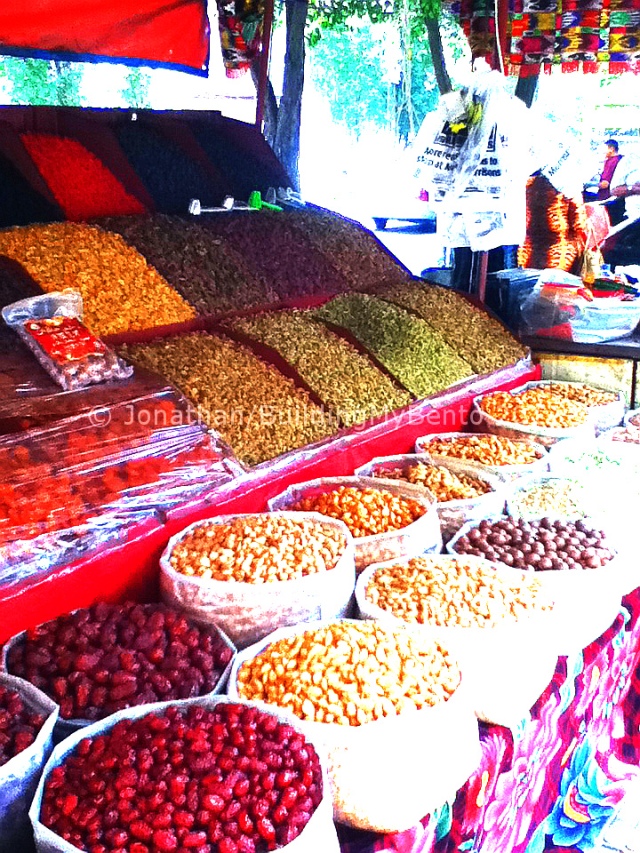 Trail Mix Paradise.  China already renamed Kunming province’s Zhongdian “Shangri-la,” so why not do the same for Xinjiang (“new frontier”)?  Such a bounty of nuts, grapes, legumes, berries, and seeds might make salivate any non-allergic hiker, spelunker or sand duner, but then again, it’s not as if the central government wants to promote foreign tourism to this part of the country anyway.  The contents of the overdeveloped shot above would make a worthy addition to NYC’s Greenmarkets, but it’s possible that the numerous health food stores around the city that smell like a musty Newark jungle already do these snacks justice.  If you do make it to Ürümqi, bring plenty of Ziploc bags for these goodies, and also a thermos bottle, as not one speck of the airport offers water for sale (most likely due to Uighur-related fear-mongering).

Wordpressing about food and languages at FindingFoodFluency.com, and about travel news and attractions at NoWorkAndAllTravel.wordpress.com
View all posts by NoWorkAndAllTravel →
This entry was posted in China & Hong Kong, East & Southeast Asia, Food & Drink and tagged China, chinese food, islam, night market, Urumqi, Xinjiang. Bookmark the permalink.