Posted on February 7, 2012 by LearningFeelsGood

I mentioned in the last post that I would be back after “a bus ride to the border with the ROK.”  Hmm, even though I reckon everyone understood the meaning through context, that might be rad if I hopped on a bus from the states to Korea just to get some 수정과 (sujeonggwa-cinnamon tea/soup).  (link courtesy of pride0123)  Though, on the topic of Korean food, YES, I did eat while in the DPRK.  Sure, you may not be able to casually walk into a chicken and hof as you could to its south, but I did have at least one tasty meal:

Another shot consists of a meal in Kaesong, a city near the border with the ROK that has seen much investment from that country.  Here, 반찬 (banchan), small eats of various vegetables, fish, meat, and/or eggs that are ubiquitous at a Korean restaurant, dominate:

Banchan just for me~

I don’t drink alcohol, but in the DPRK, you don’t drink tap water, so instead waitstaff served everyone beers.  That, and whenever lettuce decided to invite itself to my gullet, that unfortunate doll kept ruining the fun.  Happens all over East Asia, as I mentioned in an earlier post.  (link thanks to thekitchn)

Kim Il Sung was, is and (wait two seconds) still is the most important figure in the history of the DPRK.  You’ll see his portrait along with Kim Jong Il’s in every building, as well his smiling figure on many murals throughout the capital.  One of the literal “must-dos” of a guided tour is to visit Mansudae Grand Monument, composed of a statue of Kim Il Sung dedicated to his 60th birthday, flanked on his and right sides by nearly life-sized carvings of citizens holding up the DPRK flag and the Workers’ Party flag, and in the background, a mosaic of the communism-defying spiritual home of the Koreans (and less likely Kim Jong Il), Mt. Paektu.  By this point you should know the verb BOW and be able to swiftly execute one. You may recall that I noted in the first DPRK post that taking a non full-sized photo of Kim Il Sung (specifically at Mansudae) is a big 아니오 (anio).  I could photoshop it and take away his shoes, or replace his face with that of Koizumi Junichiro, but I won’t:

Another impressive landmark is the Monument to {the Workers’} Party Foundation, built to commemorate the 50th anniversary of the party, which was founded in 1945.  The hammer, sickle and paintbrush respectively represent the worker, farmer and intellectual (oh, yeah?):

In a country of sobering dedication, a visit to Kumsusan Memorial Palace makes clear, if it didn’t before, how dominating one person can become.  If you’ve made it this far without growing wear of reading the words “Kim Il Sung,” here, enjoy this.  (link thanks to Florida Gardener)  Kumsusan, Kim Il Sung’s (and his son’s) mausoleum is the reason Koryo Tour participants had to pack a nice set of slacks and a button-down.  No photos were allowed inside, and our electronics were taken for the duration of the time we were inside the giant structure.  We had to take travelators, have a burst of air blast away any last spec of dust on ourselves and keep good posture for our visit.  Once we reached his body, we were told to deeply bow on three sides, moving stoically each time, and in groups of four.  All of this in his former residence and office.  Kumsusan was the first mausoleum I had seen on the checklist of “great mausoleums of the world,” and yep, I’d call it first-rate: 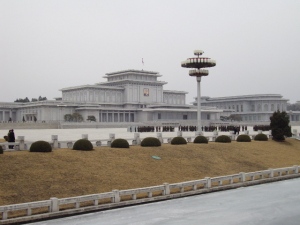 The Revolutionary Martyrs’ Cemetery, located on Mt. Taesong, was another focal point of the itinerary, as it honors those who died fighting Japanese occupiers, including Kim Jong Suk, Kim Il Sung’s wife and Kim Jong Il’s mum: 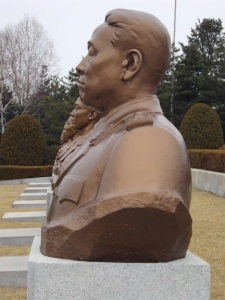 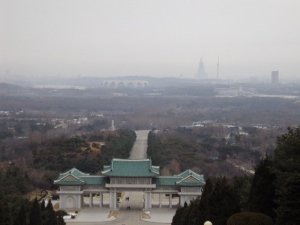 Pictures of the Pyongyang subway, a school and the border, coming up next…  and if you have suggestions or topics that you’d like to see on here, for a future travelogue, please let me know.  감사합니다.

Bread, olive oil Waking up in Nakagin Sure does sound like me
View all posts by LearningFeelsGood →
This entry was posted in East & Southeast Asia and tagged Asia, Communism, DPRK, North Korea, Pyongyang, skyline, Travelogue. Bookmark the permalink.